The remaining livestock available for processing for the rest of the season will be less than in any of the previous five seasons, according to a forecast by Beef + Lamb New Zealand’s Economic Service (B+LNZ).
Tuesday, 20 February 2018 The analysis by B+LNZ shows dry conditions and strong prices for lamb, mutton and beef in the December quarter of the 2017-18 season drove high processing volumes.

The average value per tonne for lamb, mutton and beef exports were at record or near record levels in the December quarter.

The season runs from October to September, with peak processing usually occurring in the March quarter.

B+LNZ forecasts the total number of lambs available for processing in 2017-18 will be up 1.3% on the previous season. However, the number processed in the December quarter was up 13%, leaving 2.1% fewer lambs for the remainder of the season compared to 2016-17.

B+LNZ estimates the number of sheep available for processing in the January to September period of the 2017-18 season is down 17% compared to the previous season. The total number of sheep available for mutton in 2017-18 is forecast to be down 6.0% on the previous season. However, 15% more were processed in the December quarter, which is a record for the period.

Additionally, Australian sheepmeat exports are forecast to decline in 2018. Meat & Livestock Australia (MLA) has projected Australia’s lamb exports to be down 4% and mutton exports down 6%. Excluding Intra-European Union trade, Australia and New Zealand account for approximately 90% of international sheepmeat trade.

The total number of cattle available for the 2017-18 season is estimated to be even with the previous season but down 3.7% on the five-year average.

However, 15% more cattle were processed in the December quarter, which means 4.7% fewer cattle are available for the rest of the season, says Mr Burtt.

“An increase in the number of cows and bulls processed – up 33% and 23% respectively – contributed to the higher number of cattle processed in the December quarter.

“The dry conditions for some dairy-producing regions drove some of the increased cow processing as farmers managed their feed stocks for the rest of the summer.

“The dry December quarter brought forward some of the bull processing for the same feed management reasons. The number of bulls processed has been generally increasing in recent seasons.”

Steers processed in the December quarter were up 5.9%, which reduced the number available for the rest of the season by 3.7%. 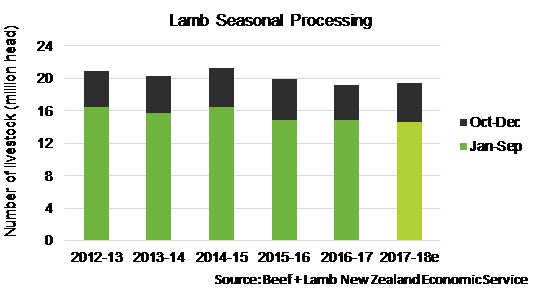 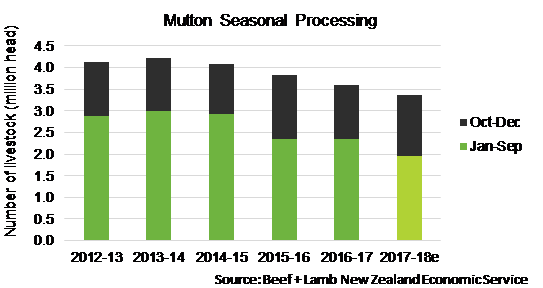 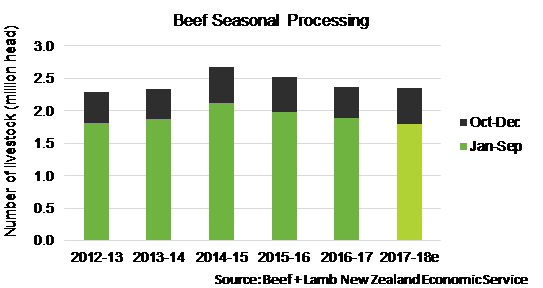 Beef + Lamb New Zealand (B+LNZ) says the Government’s announcement that exotic trees will no longer be removed from the permanent category of the Emissions Trading Scheme (ETS) is a step back from addressing the deeply concerning sale of sheep and beef farms for carbon farming.

Farmers are grappling with an unprecedented amount of new and proposed environmental rules. Here’s an update on what B+LNZ is doing to get the best outcomes for farmers.