Although New Zealand’s still in COVID-19 lockdown, it hasn’t stopped scientists at Manaaki Whenua – Landcare Research from devising some ingenious home-based workarounds, to make sure that their research can keep going even if they aren’t allowed to go into the field to do their fieldwork.
Friday, 17 April 2020

One objective of this wide-ranging work is to show whether variations in soil moisture and soil temperature can be mapped at the farm scale, to model the expected performance of different types of legume pasture.

In collaboration with AgResearch and Lincoln University, the team at Manaaki Whenua plans to install a sensor network on six farms in the North and South Islands to record soil moisture and temperature, and then to model the whole farm in detail from that data.

Jagath’s job is to build the six sensor networks that this work will rely on. The sensors are really clever pieces of kit – they don’t just record the data for someone to come and get it later, but each sensor also communicates with a gateway base site up to 15km away. The gateway, which has cell phone connectivity, then sends the data to a cloud storage site where it can be viewed and used in near realtime. Each network has 20 dual sensors that record both moisture and temperature.

Of course, with the lockdown in place, the fieldwork can’t begin on farm – yet. To make up for lost time, Jagath has been building all 120 sensors on his living room table. To test the first 20-sensor network ahead of the lockdown being lifted, he has installed the directional antennae and logger for each sensor on his garden fence, while the sensors are stuck into his lawn.

It’s a typical piece of ingenuity that New Zealand’s scientists are renowned for – and it’s helping to keep our science endeavours going even in these unprecedented times. Jagath says that particular thanks are due to his wife, Chitra, both for allowing the living room to be taken over for the project during lockdown, and for help in assembling the sensor nodes. 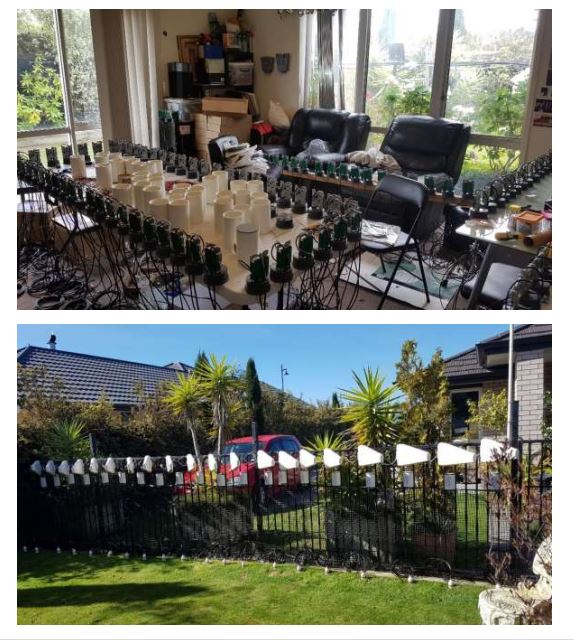