Red meat export receipts reached a record high for the December quarter of the 2017-18 season, according to an analysis by Beef + Lamb New Zealand's (B+LNZ) Economic Service.
Friday, 19 January 2018

The record was driven by high export volumes and average Free-on-Board (FOB) per tonne at record values for lamb and mutton, and near record values for beef, while the New Zealand dollar (NZD) has remained relatively strong.

Andrew Burtt, B+LNZ chief economist, said lamb and mutton farm-gate prices were up 30% and 59% respectively for the first quarter of the season (October-December 2017) compared to the previous season. Cattle prices were relatively steady – up 5%.

“Average value per tonne for exports started at a high level after strong growth during the 2016-17 season and have remained strong despite higher processing volumes so far in 2017-18.

“Dry conditions led to an increase in New Zealand sheepmeat, cow and bull production over the first quarter compared with the same quarter in 2016-17, but similar to production in 2015-16.

“The 2016-17 season started slowly due to generally wetter and cooler weather and livestock were harder to finish, but good pasture availability reduced pressure on farmers to sell.”

New Zealand beef and veal exports generated $588 million in the first quarter of the 2017-18 season, up 29% compared with the same period last season and the second highest on record for the December quarter – only behind the 2015-16 season.

This reflected a 21% increase in shipments to 78,900 tonnes, again, only just behind the December quarter of 2015, said Mr Burtt.

In the 2017-18 New Season Outlook, the total number of cattle available for slaughter was forecast to be even with the 2016-17 season.

The USA took 43% of total beef export volume and remained the largest market for New Zealand beef – up 27%. The average value increased 11% to $6,760 per tonne to receipt $231 million by value.

The majority of exports to the USA (88%) were cuts intended for processing, which is complementary to USA production as lean New Zealand beef is often used to blend with US beef.

Lamb: Shipments up and record average value per tonne

The analysis shows New Zealand lamb export receipts reached a record high of $677 million from October to December 2017, up 47% on the same period in 2016.

This reflected a 21% increase in shipments to 64,700 tonnes. Again, the higher shipments of lamb are due to a faster start to the export production season rather than an increase in the season’s production.

B+LNZ’s Economic Service forecast was for lamb production over the entire season to be the same as the previous season.

“Demand from China was particularly strong with export receipts up 114% to $164 million,” said Mr Burtt.

“The large increase in receipts from China was driven by a 31% increase in the FOB value per tonne and exports volume up 64% (9,300 tonnes) to 23,800 tonnes. The increase across all New Zealand lamb export markets in the December quarter was 11,000 tonnes. Over 90% of the lamb exports to China were bone-in cuts.”

Mutton: Mutton shipments boosted by a lift in production

Mutton export receipts reached a record high of $146 million in the first quarter of the 2017-18 season – up 93% – driven by strong increases in volume and average value per tonne. Previously, the record was $96 million in 2015.

The volume of mutton exports was up sharply in the December quarter – by 46% – but total mutton production is forecast to be down 9.1% for 2017-18.

Mr Burtt said: “This was the highest volume of mutton exported since subsidies were removed. The average value per tonne was a record $6,680, up 32% on the same period in the previous season.”

The increase of average value per tonne was spread across the major markets but there was a major increase in volume to China.

B+LNZ’s Economic Service will review its farm-gate price forecasts in the 2017-18 Mid-Season Update report to be published in March.

* FOB is the total value at export, including processing, packaging and transport of the goods within New Zealand.

B+LNZ has developed an interactive tool for further analysis of New Zealand's meat exports. The tool allows you to generate and download customised data and graphs of export lamb, mutton and beef statistics, by market, value, and volume.

Please note that all export values quoted are FOB (free on board) and in New Zealand dollars and all volumes are in tonnes shipped weight. 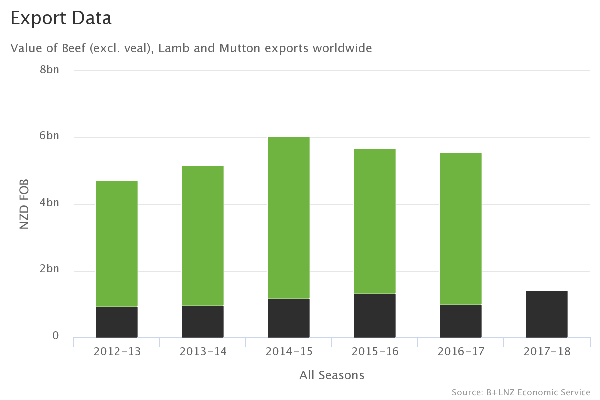 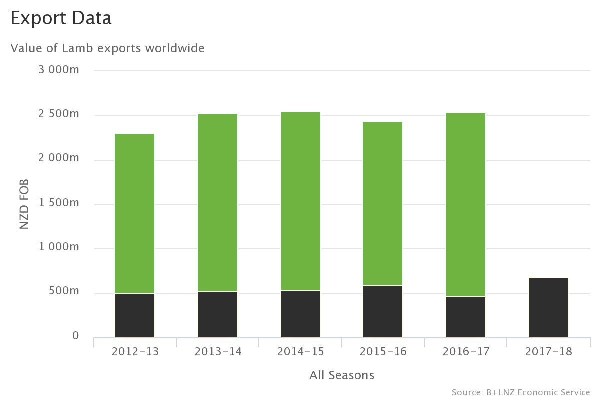 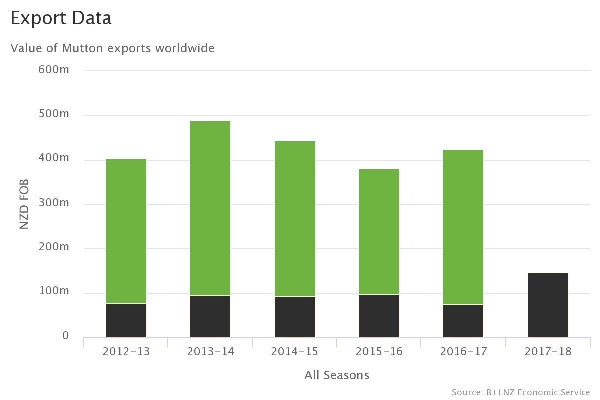 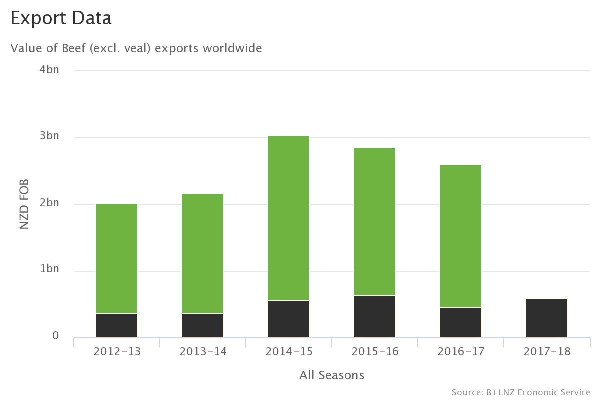 Media Release
Friday, 19 January 2018
Lamb and mutton farm-gate prices were up 30% and 59% respectively for the first quarter of the season (October-December 2017) compared to the previous season.

Gisborne farmer George Mcildowie sees the availability of sound accessible information such as that produced through the Beef + Lamb New Zealand-funded Hill Country Futures Partnership programme as critical to the changes hill country farmers need to make to ensure the sector is sustainable into the future.

Pneumonia and associated pleurisy cost the sheep industry significant amounts of money every year in lost production and downgraded carcasses, but simple management factors can help prevent these diseases.