During his speech, Mr Guy released a report on the economic evaluation of reticulated drinking water for stock. Read the Ministers press release.

The evaluation of reticulation was funded by Beef + Lamb New Zealand, MPI, MBIE and Te Puni Kōkiri. All up it involved 11 case study farms around the country.

All the farmers who took part thought their investment was a good decision. They found they were better able to cope with drought as the availability of drinking water gave them more flexibility to effectively use all their available pasture. This, in turn, resulted in improved stock numbers and stock performance. 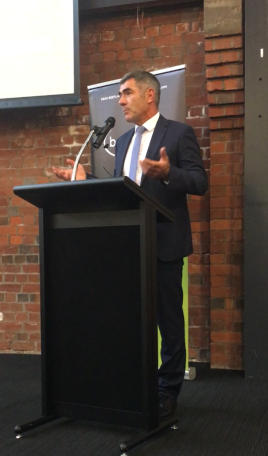 Reticulation has the environmental benefit of reducing pressure on waterways by providing stock with another source of drinking water. The availability of drinking water meant that waterways, wetlands and dams could be fenced off. It also meant farmers could plant riparian strips and protect regenerating bush.

Being able to fence dams has the animal welfare benefit of preventing stock either getting stuck in dams during dry periods or drowning.

Overall the benefits were:

And the financial analysis showed:

If you want to read more see the links below.

by Geoff Ridley
Reticulation has the environmental benefit of reducing pressure on waterways by providing stock with another source of drinking water.

Beef + Lamb New Zealand (B+LNZ) says the Government’s announcement that exotic trees will no longer be removed from the permanent category of the Emissions Trading Scheme (ETS) is a step back from addressing the deeply concerning sale of sheep and beef farms for carbon farming.

Farmers are grappling with an unprecedented amount of new and proposed environmental rules. Here’s an update on what B+LNZ is doing to get the best outcomes for farmers.